Sister Chân Thoại Nghiêm (“True Adornment with Auspiciousness”) was born in Vietnam and spent her teenage years there. After graduating from university, she worked in California. During her time in the US, she was an active member of the local Vietnamese Youth Buddhist Society and served as a leader. Her aspiration to help others grew bigger after she visited Plum Village in 1992, and this aspiration brought her back to ordain as a novice under Thich Nhat Hanh’s (Thầy’s) guidance in 1993.

Sr. Thoại Nghiêm received Lamp Transmission to become a Dharma Teacher in 1999. Afterwards, she was sent by Thầy and the sangha to help establish Deer Park Monastery (USA) from 2000 – 2002, and Prajna Monastery (Vietnam) from 2005 – 2009. She helped in organizing Thầy’s teaching tours in Asia, Europe, and North America. Since Thầy’s health decline, Sr. Thoại Nghiêm has been by Thầy’s side to take care of his dietary needs. She had given teachings in Australia, North America, Asia and Europe. Besides serving the community in administrative works, she enjoys cooking, gardening and writing. 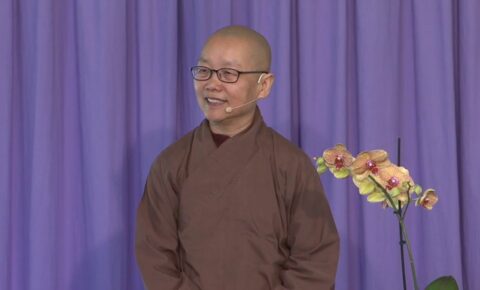 Sr Thoai Nghiem gives an a la carte Dharma talk where she solicits topics to speak on from the public. She was requested to talk about the current day environmental degradation, how to love without attachment, how to practice love with parents in the face of harsh words, how…