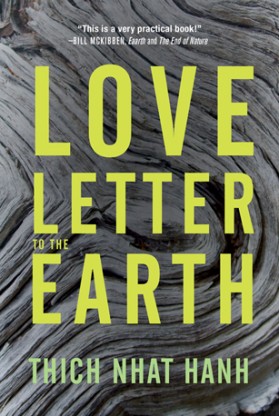 A Buddhist Approach to Deep Ecology

Thich Nhat Hanh has been a pioneering voice in spiritual ecology since the early 1970s, contributing a new language of “interbeing” vividly articulating the interconnectedness of all that is. In “Love Letter to the Earth” (2013), he called for a radical shift in consciousness to protect the planet. Bringing together science, ecology and Mahayana Buddhism, he makes a powerful call for everyone to “fall in love with the Earth,” arguing that the happiness and survival of our species depends on it. This lyrical paean for “mother Earth” had a remarkable impact, introducing the language of love to the international discourse leading up to the 2015 Paris Agreement. Christiana Figueres, the convener of the talks, said she never travelled without it.