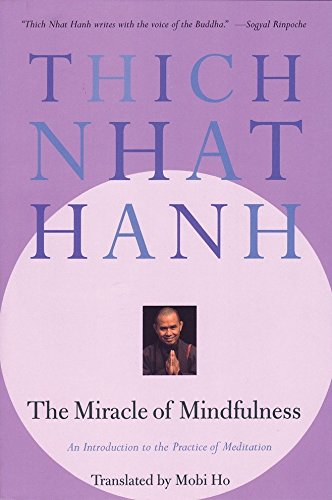 An Introduction to the Practice of Meditation

The Miracle of Mindfulness was written by Thich Nhat Hanh, while he was living in exile from his homeland, as a long letter to Brother Quang, a main staff member of the School of Youth for Social Service in South Vietnam in 1974. Exiled from Vietnam he wrote to his students offering concrete practices to help them through the turmoil of the Vietnam war.

Thich Nhat Hanh, had founded the School in the 1960s as an outgrowth of “engaged Buddhism.” It drew young people deeply committed to acting in a spirit of compassion. Upon graduation, the students used the training they received to respond to the needs of peasants caught in the turmoil of the war. They helped rebuild bombed villages, teach children, set up medical stations, and organise agricultural cooperatives.

In this beautiful and lucid guide, Thay offers practical exercises as a means of learning the skills of mindfulness–being awake and fully aware. From washing the dishes to answering the phone to peeling an orange, he reminds us that each moment holds within it an opportunity to work toward greater self-understanding and peacefulness.