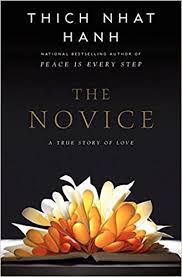 A Story of True Love

The Novice is the parable of Kinh Tam a girl with a fierce determination to practice, so much so that she disguises herself as a man to become a monk, and how she became known as Quan Am Thi Kinh (Guan Yin).

Through the parable of a young woman who stays true to herself and her faith in the face of adversity, Thich Nhat Hanh enables readers to embark on their own path of introspection and self-discovery.