On 11th September Thay completed a profound and beautiful new English translation of the Heart Sutra, one of the most important sutras in Mahayana Buddhism.

This new English translation is based on the new Vietnamese translation that Thay began working on three weeks ago at the European Institute of Applied Buddhism in Germany.

Below the sutra you can read Thay’s explanation of why he made this new translation.

This new translation will now be used in all Plum Village chanting sessions and ceremonies, and it will appear in the next edition of the Plum Village Chanting Book. The chant has been set to music. Below you can enjoy a recent recording live in the meditation hall. Sheet music is here.

The Insight that Brings Us to the Other Shore

„The Insight that Brings us to the Other Shore“ translation by Thich Nhat Hanh is licensed under a Creative Commons Attribution-NonCommercial 4.0 International License.

The reasons for a new translation

Thay’s message of explanation to his students, translated from the Vietnamese. Thay wrote this text on the 22nd August 2014, after completing his very first translation draft in Vietnamese.

Thay needs to make this new translation of the Heart Sutra because the patriarch who originally compiled the Heart Sutra was not sufficiently skilful enough with his use of language. This has resulted in much misunderstanding for almost 2,000 years.

Thay would like to share with you two stories: the story of a novice monk who paid a visit to a Zen master, and the story of a Bhikkhu who came with a question to the Eminent Master Tue Trung.

In the first story, the Zen master asked the novice monk:
“Tell me about your understanding of the Heart sutra.”

The Eminent Master Tue Trung was a lay Zen master who had once served as the mentor for the young King Tran Nhan Tong, in 13th Century Vietnam. One day, a Bhikkhu paid him a visit to ask him about the Heart Sutra.

“Respected Eminent Master, what does the phrase ‘form is emptiness, emptiness is form,’ really mean?”
At first the Eminent Master remained silent. And then, after a while, he asked:
“Bhikkhu, do you have a body?”
“Yes, I do.”
“Then, why do you say that the body does not exist?”

The Eminent Master then continued, “Do you think that in empty space there is form?”
“No, I do not see that there is form.”
“Then why do you say that emptiness is form?”

The Bhikkhu stood up, bowed, and went on his way. But the Master summoned him back in order to recite to him the following gatha:

In this story the Eminent Master Tue Trung seems to contradict the Heart Sutra and challenge the sacred formula ‘form is emptiness and emptiness is form,’ considered inviolable in the Prajñāpāramitā literature.

Thay believes that the Eminent Master went too far. The Master was not able to see that the mistake doesn’t rest in the formula, ‘form is emptiness’ rather, it resides in the unskillfulness of the line, ‘Therefore in emptiness there is no form.’ According to Thay, the way in which words are used in the Heart Sutra, right from the beginning up to the line: ‘no birth, no death, not defiled, not immaculate, not increasing, nor decreasing,’ is already perfect. Thay’s only regret is that the patriarch who recorded the Heart Sutra did not add the four words ‘no being, no non-being’ immediately after the four words ‘no birth, no death,’ because these four words would help us transcend the notion of being and non-being, and we would no longer get caught in such ideas as ‘no eyes, no ears, no nose, no tongue…’ The nose of the novice monk is still sore, even today. Do you understand?

The problem begins with the line: ‘Listen Shariputra, because in emptiness, there is no form, feelings, perceptions, mental formations, and consciousness’ (in Sanskrit: TasmācŚāriputraśūnyatayāmnarūpamnavedanānasamjñānasamskārānavijñānam). How funny! It was previously stated that emptiness is form, and form is emptiness, but now you say the opposite: there is only emptiness, there is no body. This line of the sutra can lead to many damaging misunderstandings. It removes all phenomena from the category ‘being’ and places them into the category of ‘non-being’ (no form, feelings, perceptions, mental formations or consciousness…). Yet the true nature of all phenomena is the nature of no being nor non-being, no birth and no death. The view of ‘being’ is one extreme view and the view of ‘non-being’ is another extreme view. It is because of this unskillfulness that the novice monk’s nose is still sore.

The famous gatha ascribed to the sixth patriarch Hue Nang (Hui-neng), in which he presented his insight to the fifth patriarch Hoang Nhan (Hung-jen), also expresses this notion and is also caught in the same wrong view:

The insight of prajñāpāramitā is the most liberating insight that helps us overcome all pairs of opposites such as birth and death, being and non-being, defilement and immaculacy, increasing and decreasing, subject and object, and so on, and helps us to get in touch with the true nature of no birth/no death, no being/no non-being etc… which is the true nature of all phenomena. This is a state of coolness, peace, and non-fear that can be experienced in this very life, in your own body and in your own five skandhas. It is nirvana. Just as the birds enjoy the sky, and the deer enjoy the meadow, so do the wise enjoy dwelling in nirvana. This is a very beautiful sentence in the Nirvana Chapter of the Chinese Dharmapada.

The insight of prajñāpāramitā is the ultimate truth, transcending of all conventional truths. It is the highest vision of the Buddha. Whatever paragraph in the Tripitaka, even in the most impressive of the Prajñāpāramitā collections, if it so contradicts this, it is still caught in conventional truth. Unfortunately, in the Heart Sutra we find such a paragraph, and it is quite long.

That is why in this new translation Thay has changed the way of using words in both the original Sanskrit and the Chinese translation by Huyen Trang (Xuan-Zang). Thay translates as follows: ‘That is why in emptiness, body, feelings, perceptions, mental formations, and consciousness are not separate self entities.’ All phenomena are products of dependent arising: that is the main point of the prajñāpāramitā teaching. ‘Even insight and attainment do not exist as separate self entities.’ This sentence is as important as the sentence ‘form is emptiness.’ Thay also has added ‘no being, no non-being’ into the text. No being, no non-being is the deep vision of the Buddha stated in the Kātyāyana sutra, when he offered a definition on right view. These four words, no being, no non-being, will help future generations not to suffer from a twisted nose.

Dear Family, I hope you enjoy practicing the new version of the Heart Sutra in English. We have an English translation and Br. Phap Linh is in the process of composing the music for the new chant. The next edition of the Chanting Book will include this new translation. Yesterday, on the 21st of August, after finishing the translation at around 3a.m., a moon ray penetrated Thay’s room.

With love and trust,
Your Teacher 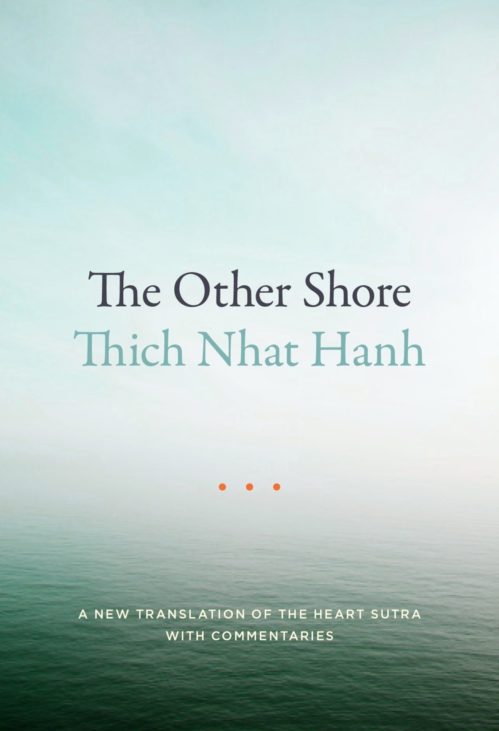 A New Translation of the Heart Sutra with Commentaries

In September, 2014 Thich Nhat Hanh completed a profound, beautiful and radical new English translation of the Prajñaparamita Heart Sutra, one of the most important and well-known sutras in…