The monks and nuns of the Plum Village International Community of Engaged Buddhists stand by our beloved teacher, the Zen master, global spiritual leader, peace activist and poet Thich Nhat Hanh, as he returns again to his homeland. Since celebrating his 92nd birthday last month, he has expressed a deep wish to go back to reside at his “root temple,” Tu Hieu Temple in Hue, Vietnam, to live his remaining days. Thich Nhat Hanh has turned formidable physical challenges arising from the major stroke he suffered four years ago into a powerful teaching by continuing to live each moment peacefully and joyfully, with great presence and meaning.

Tu Hieu Temple is where Thich Nhat Hanh first became a monk in 1942, aged sixteen. After nearly sixty years spreading the teachings abroad, Thich Nhat Hanh’s final homecoming is a source of peace and happiness for his students, Tu Hieu Temple and lineage. It is very precious for Thich Nhat Hanh’s large international following to maintain this deep and enduring connection to our spiritual roots in Vietnam. Thich Nhat Hanh, who coined the term “Engaged Buddhism” and who has dedicated his life to renewing Buddhism so it can help individuals and societies address the challenges of our times, has always seen the roots of his teachings in the engaged spiritual life of the distinguished Buddhist patriarchs during Vietnam’s ancient Ly and Tran dynasties.

Although since his stroke Thich Nhat Hanh has no longer been able to speak, he remains powerfully alert and present. After summoning his senior disciples to a meeting on 24th October in Plum Village Thailand, where he has been residing since December 2016, Thich Nhat Hanh clearly communicated his wish to return to Vietnam using gestures, nodding and shaking his head in response to questions. The necessary arrangements were made for his return and he landed at Da Nang Airport, Vietnam on the afternoon of 26th October. His arrival was celebrated by a receiving party of senior Buddhist venerables, monks, nuns and lay followers.

After resting for two days by the ocean to recover from the journey, Thich Nhat Hanh arrived at Tu Hieu on the afternoon of October 28th, where he was welcomed with a traditional formal procession and the sound of drums and bells. As he entered, he took a moment to reach out and touch the cool stone of the ancient gateway: a seal of arrival and return. Everyone present remained silent as he contemplated the half-moon pond, where he had spent many memorable moments as a young monk, and then made his way to the Buddha hall to pay his respects and offer incense at the ancestral altar.

Since his arrival, Thich Nhat Hanh’s health has remained fragile but stable. He has joined his community in walking meditation at dawn, visiting every corner of this temple that was his home and where he was nurtured as he embarked on his spiritual path. On the evening of October 26th in Da Nang, as the current Abbot and Head of Tu Hieu lineage, Thich Nhat Hanh directed his disciples to draft a letter inviting all the monks and nuns of the Tu Hieu lineage (disciples and descendants of Zen Master Thanh Quy, his teacher), to a joyful family gathering and homecoming celebration at Tu Hieu Temple on Saturday November 3rd. As Thich Nhat Hanh said when he first returned to Vietnam in 2005, after four decades of exile, “There is no religion, no doctrine higher than brotherhood and sisterhood.”

Even at this moment, Thich Nhat Hanh remains steadfast and energetic in using every breath and every action to build and strengthen the “beloved community of compassion,” and to cultivate healing, reconciliation and transformation in his community, society and the world. 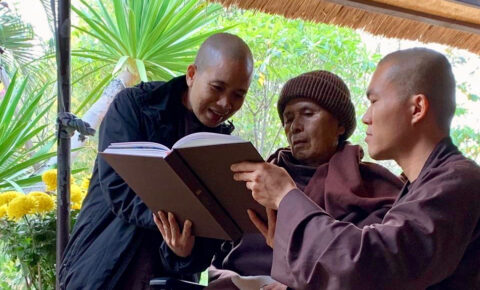