Every year on the full moon of September in the Lunar calendar, the Plum Village sangha holds a commemoration ceremony for Zen Master Tang Hoi. He is known as the earliest Buddhist meditation master of Vietnam. Please enjoy getting to know a spiritual ancestor of Plum Village and some photos from the ceremony with extracts from Thich Nhat Hanh’s book, Master Tang Hoi.

Master Tang Hoi wrote the preface to the Chinese translation of the Anapananusmriti Sutra, “Discourse on the Full awareness of Breathing”, and with two lay friends translated this sutra from Sanskrit to Chinese. This sutra forms one of the basic practices of the Plum Village tradition.

The Life Of Master Tang Hoi

Master Tang Hoi was born sometime in the first decade of the third century. The date of his death has been recorded at 280 C.E. His father was of Sogdian descent. Sogdian was a province in Central Asia in what is now Uzbekistan. His mother was native of Jiaozhou (Vietnam). When Tang Hoi was only ten years old, both his parents passed away, and he was accepted in a local temple as a young novice in a monastery in Luy Lau, the capital of Jiaozhou, in the province of Bac Ninh in what is now northern Vietnam.

Tang Hoi not only lost his parents at an early age, he also lost three of his primary teachers in the monastery. Though he was saddened by these losses, Tang Hoi was determined to practice and devote his life to helping others practice. He went on to establish a major practice center in Luy Lau, which may have been named Dharma Cloud Temple, where a large community of Vietnamese monks lived and practiced Buddhism under his guidance.

Under Han rule of China, it was forbidden for people to ordain as Buddhist monks. However, because Jiaozhou was such a remote part of the Han Empire, Buddhists were able to maintain a monastic Sangha composed of local monks and Indian monks who took residence in Luy Lau. In Tang Hoi’s center, Buddhist scriptures were translated from Sanskrit into Chinese. The Anapananusmriti Sutra and many sutras were translated here with the help of some laymen who knew both Sanskrit and Chinese.

After practicing and teaching in Luy Lau for some years, in 247 C.E, Tang Hoi went to Jianye, the Wu capital. There he built a small hut and settled in to practice. When Tang Hoi arrived in Jianye, however, people were very suspicious of him. Finally, King Wu Sun Quan summoned Tang Hoi to court. He questioned Tang Hoi and asked why he had come to Jianye. Because Tang Hoi was strong in his practice and a learned monk, he eventually was able to win over King Wu Sun Quan.

Tang Hoi established a practice center in Jianye, the First Temple, was also called Buddha ‘s Center. He organized ordination ceremonies and taught the monks. For the first time in its history, natives were allowed to ordain and practice as Buddhist monks.

But the “new” religion was not always supported by the rulers. When King Wu Sun Quan passed away, his son, Sun Hao under the influence of the mandarins did everything he could to oppose Buddhism. Nearly all Buddhist temples in the region were destroyed, although the king and the Wu mandarins did not dare to touch the First Temple because of its prestige. Though the King did not destroy the temple, he forced the name to be changed.

King Sun Hao summoned renowned intellectuals to challenge Tang Hoi and discredit his teachings. Many members of the Chinese intelligentsia from the capital were present at the debate, which went on from early morning until late at night. Tang Hoi did not flinch. After that, the King could only admire Tang Hoi, and from that time he stopped opposing him. He asked to take refuge and receive the Five Mindfulness Trainings.

The First Temple continued to serve as an important center until the Minh era (fifteenth century). Many descendants of Tang Hoi’s lineage trained there. Unfortunately, during the violent political upheaval in south China from 1851-1864, the temple, which was the continuation of the First Temple, was destroyed. Today not the slightest trace of this important historical site is left.

Fortunately, the teachings of Tang Hoi are written in his own hand. They can be considered an exact record of what he taught in Jiaozhou and in the Wu province. We know that Tang Hoi’s preface to the Anapananusmriti Sutra was written before he left Jiaozhou for Dong Wu. Thus we can say with confidence that the Buddhist meditation tradition in southern China, in the region south of the Yangtze River (the Wu province of Jiangzou), was first established and structured by the Vietnamese monk and meditation master Tang Hoi. 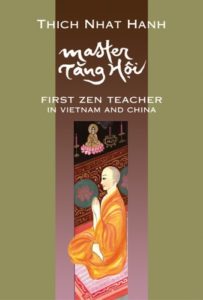 Master Tang Hoi presents an overview of the life, work and thought of Tang Hoi, the earliest known Buddhist meditation master of Vietnam. Tang Hoi was born in the…