I would like to share an experience I’ve had in a Winter Retreat that has inspired me until today.

This was in the early times of Plum Village, maybe in Winter 1991. Thay used to teach in the dining hall in the Lower Hamlet. The old dining hall. Some of you know what it looked like. There was a big wood stove, and Thay used to sit near the wood stove behind a table, and we would all sit on chairs in rows in front of Thay.

At that time, we had to cook in a corner of the dining hall where the sink used to be. There was a counter to cut the vegetables, with the sink and a stove behind it. There was not much space in the Dining hall and we would be cooking while Thay was giving the Dharma Talk.

At those times, we had smaller cooking teams. Our cooking team was a team of two: me and myself. Our team had to cook for 45 people, which was quite challenging for a team that had never cooked for more than six people. It was my first time to cook on a Day of Mindfulness.

Thay was teaching in the front of the Dining Hall and I was in the corner, washing and cutting vegetables then cooking them on the stove. I had to be very quiet so as not to disturb Thay and be very present with what I was doing. I was cutting the vegetables, breathing, cutting, washing … … Then I had to wash the pot. I had to go from the cooking corner to the next room where the sink for washing pots was. This meant I had to walk passed Thay!

I picked up the pot and walked really mindfully, aware of every step and breath. I went to the other kitchen, washed the pot. There was no door that could be closed and from the dining hall you could hear everything that was happening in that room. When I had finished washing the pot I walked back and continued to cook.

The atmosphere felt very light and I was very present with what I was doing. After the Dharma Talk Thay came straight to the counter where I was cooking and said: “Sr. Jina is a good cook.” I looked at Thay in surprise. Thay had never tasted anything I cooked. How could Thay know whether I was a good cook or not? Thay gave me a big smile and at that moment I understood. I got it! Thay was not referring to the taste of my dishes but to how I had been cooking and moving around. 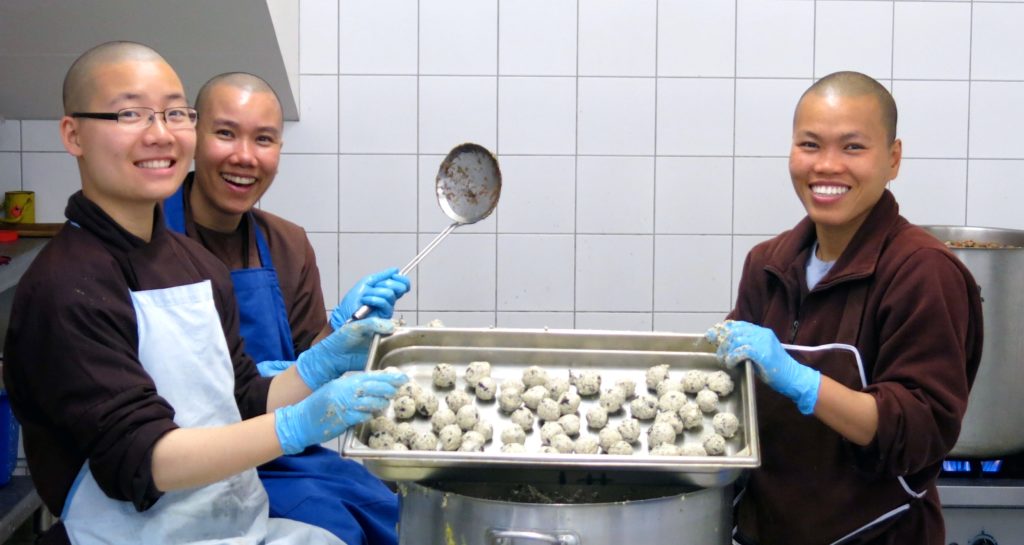 Although it was not the only day I cooked, it is the only one I remember. Cooking in the presence of Thay it felt like I wasn’t cooking alone. I had been benefitting from Thay’s presence, Thay’s energy. It was a very beautiful experience.

When I find myself distracted, making noise while moving around. I remember that cooking day. It is like a bell of mindfulness. It helps me to bring my mind home to my body and become more aware of my movements.

Everyone benefits from Thay’s presence. In 1996 or 1997 when all the sisters were living together in the New Hamlet Thay would come and eat with us from time to time. One day when I walked into the dining hall I was struck by the energy in the hall. Some sisters were coming into the hall from other parts of the building. They opened and closed the doors so mindfully. Everybody was eating and moving around mindfully, especially mindfully. It stopped me in my tracks. I looked around and I spotted Thay sitting in a corner having lunch. It brought a smile to my face.

That afternoon after having shared this with Thay. Thay asked me : “Why do you think this is?” I did not answer Thay but have taken time to reflect on it. Thay’s presence increases the quality of my mindfulness and if Thay’s physical presence helps me to be more present in all I do. Then why don’t I call on Thay when walking to the meditation hall in the morning, when having lunch or when sitting? In this way I can benefit from Thay’s presence wherever I am at any time.