In these extracts from the 2011 book, Planting Seeds we hear two experiences of how children are welcomed, included, and nurtured at Plum Village summer retreats.

Plum Village: A Place for Children

This summer I traveled halfway around the world, from Hawaii to France, to participate in the simple retreat life of Plum Village. Perhaps the most impressive thing to me there was the role of children. The kind of Zen that many of us have practiced over the last decade or so in the West has essentially been that of a modified monastic schedule. Rarely, if ever, have we had visitors with children attend an entire sesshin, or training period. Those who may have come for a brief visit have had to rely on their own resources to deal with the issue of child care, often sharing with other parents.

As more of our Sangha members have children, the separation between a lay family life and this essentially monastic practice has increased dramatically. At Plum Village, I found that children are not only present, they are the center of the community. They participate in everything, and people pay attention to them quite naturally. At several group discussions, Thay raised the issue of including children in practice. Children seem to have a natural love of ceremonies, rituals, songs, and games. Parents of small children often say that it is the child who remembers to hold hands before dinner, who recognizes the beauty of a small ritual like bowing on entering the meditation hall.

Thay said that if you cannot explain what you are doing to your children, maybe it isn’t real. Children must be included and understand what you are doing if it is to be real Buddhism. Thay feels that children can understand the most profound Buddhist ideas, which at the core are very simple and straightforward, such as, “You are me and I am you,” “to understand is to love,” and “when a finger is hurt the whole hand suffers.”

Thay said, “We have to find a practice that is pleasant for children. It is very important, for if we can’t include the children, something is lacking. When children are included, the practice will be pleasant for the parents as well.”

These words made a deep impression on me. How often had I heard my friends express feelings of being torn between being with their children and meditating? Working parents whose jobs take them away from home so much are reluctant to leave their children again in the evenings or on weekends. I have noticed that while a few families in our Sangha have tried, most have abandoned the effort. It seems to me that creating a practice that includes children will solve a multitude of problems and enrich the experience for all of us. Thay states, “Practice is impossible without the support of children. Without this, it is an escape from family and society.”

In the first summer retreats that we had at the New Hamlet in Plum Village, I took care of the French children. Every day I learned so much, and I was deeply nourished by them. They had lots of energy and it was tiring to take care of them, but it was rewarding because they received my love easily and in return, they gave me love. The fruits, the consequences, of what I did were immediate. The children told me how happy they were even though we only had a few simple toys for them. They said they were happy because in Plum Village their parents were so much quieter and gentler than they were at home. They loved being in Plum Village because they saw how their parents transformed.

Each day the children surprised me. They would fidget and move around during the Dharma talk, but when I asked them questions after the talk, they knew everything; they had heard everything. When they returned home with their parents, they were the ones who maintained the practice and remembered it longer than their parents. They’re like blank sheets of paper. When I think back to the things I received in Buddhist temples as a girl, I see that I remember every little thing. When I took care of kids in Plum Village, they were a bell of mindfulness for me. They really helped me to practice. Anything I said, anything I did, they remembered for years. I only want to draw beautiful things on those blank sheets of paper.

I remember one day the children were too noisy and agitated and I was extremely tired. After just one week, I had lost my voice. They were shouting, jumping, and doing whatever they liked. I was so exhausted that suddenly I lay down like a dead person. Then the girls calmed the boys down, saying, “Be quiet, look at Sister Dinh Nghiem. She’s so tired because we are too noisy.” They calmed themselves down, and I didn’t need to use control. Because there was love between us and they saw that I was tired, they tried to help me.

I have learned that the most important thing to transmit to the children is our way of being. The children are very sensitive. They don’t live by their intellect; they live by their feelings. So our presence, calmness, gentleness, and peace are the most important things we can offer them. Therefore, we need to really practice in order to have these things to transmit to them.

The best way to transmit the teachings is to tell the children stories and then have them reenact the tales. They all love to act in skits. They also love the practices of Beginning Anew and Tea Meditation with their parents. It is wonderful to include parents in these activities and practices. Every year, these sessions have been successful and very moving.

As the children come back year after year, I see how they grow up. Last summer, I was really happy because they formed a Sangha and kept in touch with each other during the year. In the next Summer Retreat, they came together to welcome the young newcomers and make them comfortable. They were so happy together that, even though they were teenagers, they still wanted to be in the children’s group!

Through these young people, I can already see the future of Buddhism in the West. The practice is so natural to them now. When they grow up, mindfulness will seem normal. Since they started learning as children, the practice has become their life. They aren’t getting stuck on the intellectual level. Because they understand the essence of the teachings, I know they will be creative and find ways to make the practice more appropriate to the West. 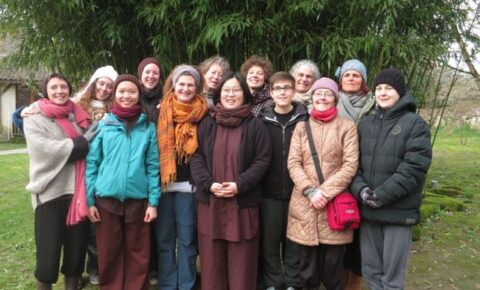 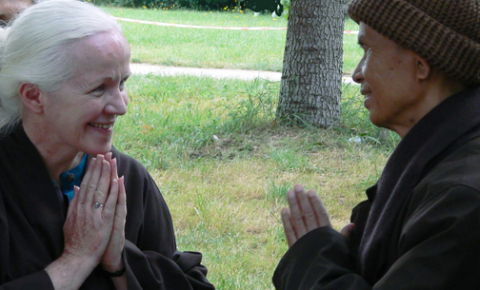 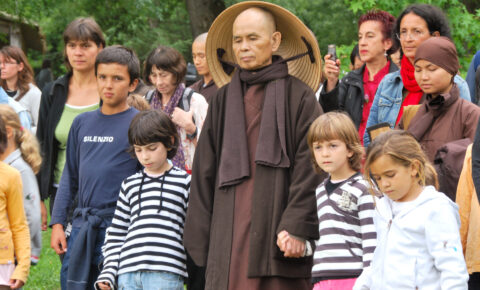