This event is part of a 3-month teaching tour of North America, which began with a retreat for 1,300 educators in Toronto, and included a day of mindfulness at the World Bank headquarters in Washington DC, and at the Harvard School of Public Health in Boston, as well as the premier US Exhibition of Thich Nhat Hanh’s calligraphic art in Manhattan, New York, and another retreat for 1,000 at Blue Cliff Monastery, New York, entitled “The Art of Suffering”. 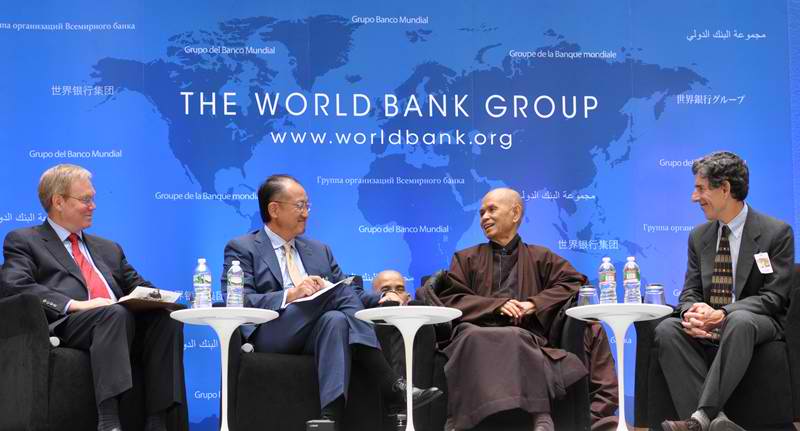 Speaking at the World Bank Headquarters in Washington DC earlier this month, Thich Nhat Hanh spoke of his close friendship with Dr Martin Luther King Jr., and how since King’s death, he has dedicated his life to realise their shared dream of building a “Beloved Community”.

“I remember,” said Thich Nhat Hanh, “the last time I met Dr King, we spoke about community-building. Unfortunately King was killed not long after that, and I vowed to myself, that even in exile, I would redouble my efforts, and put all my energy into the practice of building the Beloved Community we had discussed together.”

Learning Mindfulness, together
At Magnolia Grove Monastery, people of all backgrounds and faiths come together in a spirit of “brotherhood and sisterhood”, learning and practicing the “art of mindful living” as a community. Visitors learn to practice sitting meditation, walking meditation, mindful eating, total relaxation, and hear moving speeches from Thich Nhat Hanh on mindfulness, reconciliation, family relationships, true love and global ethics. Magnolia Grove is one of Thich Nhat Hanh’s three practice centres in the United States (along with Deer Park Monastery in California and Blue Cliff Monastery in upstate New York). A giant new meditation hall and Bell-tower have just been completed at Magnolia Grove, in time for a 5-day meditation retreat which opens for 1000 people today (including 100 monks and nuns). 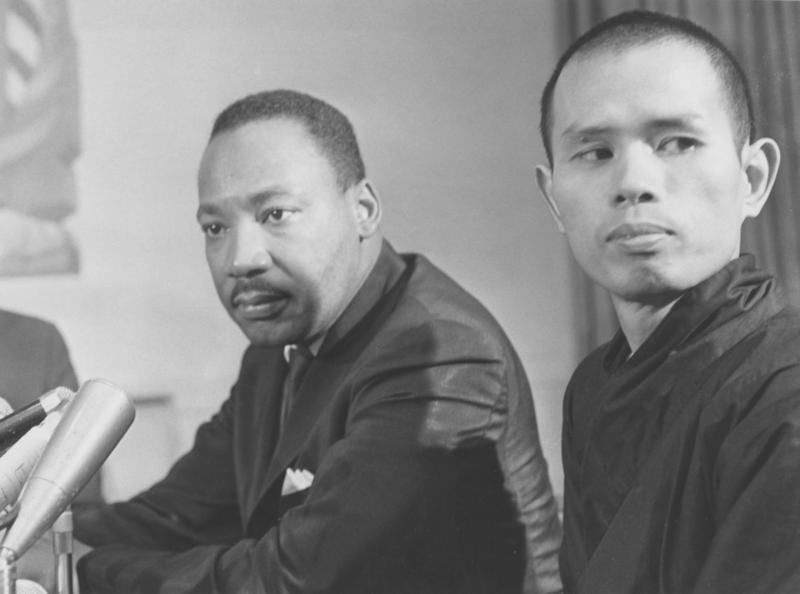 Thich Nhat Hanh celebrated the 50th Anniversary of Dr. King’s “I have a Dream” speech during a similar retreat at Blue Cliff Monastery, New York. Speaking at Magnolia Grove this week, Thich Nhat Hanh said, “President Obama invited us all to “let freedom ring” that day, and, together with the rest of the country we invited the bells to sound in our monastery at 3pm. But President Obama was only talking about external freedom, about economic freedom, political freedom. But each one of us needs to have inner freedom, freedom from our anger, our fear and our despair. The truth is that many of us are too busy to be free. We need to take time to cultivate our freshness and stability that are the source of our true, inner freedom.”

Monks and nuns in Memphis
“Yesterday, together with twelve of my monastic brothers and sisters, we had the opportunity to spend some time in Memphis,” says Sister Peace, an African-American monastic disciple of Thich Nhat Hanh born and raised in Washington DC. “What a great day it was to visit the National Civil Rights Museum and the very place where Dr. King stood and was assassinated. Holding Dr. King’s friend and my teacher Zen Master Thich Nhat Hanh, in my heart as I approached this sacred spot in walking meditation. And if that wasn’t enough, we were met by Alan Spearman and taken to his office to see the phenomenal film theCommercial Appealco-produced, “AS I AM”. In the same afternoon were taken to the neighborhood where this 13 minute gift was made and had the lucky fortune of meeting young Kevione and his family. We promised Chris Dean, who could not join us, that we would go to the “memorial” of Ray Lee, the place where his father was shot. Vera, Raylee’s mom found us and joined us for and impromptu tribute to her son, graced with a rendering of Amazing Grace from Kevione.

The Martin Luther King Connection
Thich Nhat Hanh first wrote to Dr. King in 1965. They met a year later in 1966, during one of Thich Nhat Hanh’s trips to the US to call for peace. In January 1967, Dr King nominated Thich Nhat Hanh for the Nobel Peace Prize. They meet for a second, and last, time at thePacem in Terris (“Peace in the World”) Conference in Geneva, May 28-31, 1967. A few days later, on April 4th, 1967 on Dr King’s return to the US, he gave his famous speech at the Riverside Church in New York, coming out publicly against the Vietnam War.

Dr. Martin Luther King, Jr. on Thich Nhat Hanh:
I know Thich Nhat Hanh, and am privileged to call him my friend… [He is] an apostle of peace and non-violence… He has traveled the world, counseling statesmen, religious leaders, scholars and writers, and enlisting their support. His ideas for peace, if applied, would build a monument to ecumenism, to world brotherhood, to humanity.
[Nominating Thich Nhat Hanh for the Nobel Peace Prize in 1967]

Thich Nhat Hanh on Dr. Martin Luther King, Jr:
The moment I met Martin Luther King, Jr., I knew I was in the presence of a holy person. Not just his good work, but his very being was a source of great inspiration for me… On the altar in my hermitage in France are images of Buddha and Jesus, and every time I light incense, I touch both of them as my spiritual ancestors… In Vietnam, we refer to Dr. King as a “Bodhisattva”, an enlightened being devoted to serving humanity…

Thich Nhat Hanh
The eighty-seven-year-old Vietnamese Buddhist monk, scholar, poet, artist, peace activist, and prolific author, is a global spiritual leader, loved and revered around the world. His powerful teachings and bestselling writings on the art of mindfulness have reached an audience of millions, from Europe to Asia to the Americas. He is the man Martin Luther King called “an apostle of peace and non-violence” when nominating him for the Nobel Peace Prize, and who has been described byTheNew York Times as “second only to the Dalai Lama” among Buddhist leaders influential in the West. For more than fifty years, Thich Nhat Hanh has been a pioneer of ‘Engaged’ or ‘Applied’ Buddhism, applying ancient Buddhist wisdom to contemporary issues. Together with his flourishing international community of monks and nuns, and tens of thousands of lay practitioners in the Americas, Europe, and Asia, he has pioneered mindfulness practices for families, relationships, schools, workplaces, prisons, veterans, council chambers, and parliaments, and even conflicts between nations. In recent years Thich Nhat Hanh has been invited to address members of the United States Congress, the Parliament of India, UNESCO, the World Bank, and the World Parliament of Religions.

Man is not our Enemy 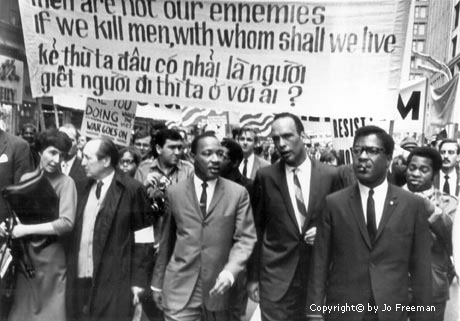 Thich Nhat Hanh composed the phrase “Man is not our Enemy” in his 1966 letter to Dr King entitled “In Search of the Enemy of Man”. “Our enemies are not man”, he wrote, but “intolerance, fanaticism, dictatorship, cupidity, hatred and discrimination which lie within the heart of man. I believe with all my being that the struggle for equality and freedom you lead in Birmingham, Alabama… is not aimed at the whites but only at intolerance, hatred and discrimination. These are real enemies of man — not man himself. In our unfortunate fatherland we are trying to yield desperately: do not kill man, even in man’s name. Please kill the real enemies of man which are present everywhere, in our very hearts and minds.”