The Plum Village sangha has just completed the 2016 “Love and Gratitude” Great Ordination Ceremony, blessed with the physical presence of Thay during the transmission of the Great Bhikshu and Bhikshuni Precepts and ceremonies to transmit the lamp to fifty new Dharma Teachers, lay and monastic.

This has been the first Great Ordination Ceremony since Thay’s stroke in November 2014, and the sangha was delighted to receive the support of many senior venerable monks and nuns who flew over from Vietnam to bring their energy and presence to the transmission ceremonies, just as they would do in previous ceremonies.

We are very grateful to the French sangha, and all the dharma teachers and members of the Order of Interbeing who came to offer energy and support: our fourfold sangha grew to over four hundred people during the five days of ceremonies from 22nd – 27th March. As in the past, simultaneous ceremonies also took place at Plum Village Thailand, with the audio being streamed live.

Everyone was deeply moved by the extent to which Thay was able to offer his presence and energy during the week, in particular at the head of the ceremony while the Bhikshu and Bhikshuni precepts were transmitted by the venerable elder monks and nuns. In Plum Village we transmit a new, modernised version of the Bhikshu and Bhikshuni precepts that Thay himself revised with the support of many elders.

Every day Thay came out to join the sangha for a gentle walking meditation and to sit quietly in the buddha gardens of the different hamlets. On several occasions Thay had great energy to practice walking several hundred yards with the help of his attendants. Every lunchtime, Thay ate in the formal dining hall with the congregation of Venerables.

On the final day, Thay was also able to witness the Transmissions of the Lamp. The Lamp Transmission Ceremony tradition is unique to Plum Village. It has been developed by Thay over the last 25 years and continues to evolve. This year, the lamp was transmitted by Thay’s most senior disciples in his name.

Thay Phap Dang represented the elders of the Bhikshu sangha to transmit the lamp to Bhikshus and lay men, in English and Vietnamese. Sister Chan Khong and Sister Chan Duc (Sister Annabel) represented the Bhikshuni sangha to transmit the lamp to Bhikshunis and lay women and men in French, English and Vietnamese.

This is the first time in our tradition that anyone other than Thay has transmitted the lamp; and that the lamp has been transmitted by Bhikshunis (including by a Western Bhikshuni) to Bhikshunis. This week the sangha is truly happy to be able realise Thay’s wish of continuing to transmit the lamp in such a profound and beautiful way.

During the ceremonies we also witnessed the first transmission of the lamp to a Chinese monk (a venerable who has been following Thay’s teachings for many years) and a Chinese nun (Thay’s own disciple, Sister Si Nghiem).

Each Lamp Transmission involves an exchange of poetry. The “candidate” offers an insight poem they have written to the patriarchs and matriarchs of our lineage (the Lieu Quan Dharma Line in the Linji Dhyana School). This poem is formally accepted, and a four-line poem is offered in return, on behalf of the patriarchs and matriarchs. The poem from the patriarchs may be in English, French or Vietnamese, and identifies spiritual qualities for the new Dharma Teacher to cultivate on their path ahead. After the exchange of poetry, the lamp is transmitted, in the name of the lineage and of Thay.

In June 2014, just a few months before is stroke, Thay said “we need at least a thousand more Plum Village Dharma Teachers” to serve the needs of the world. We are so happy to welcome fifty new dharma teachers in France this year, and many more in Thailand, to continue to realise Thay’s career in the world. 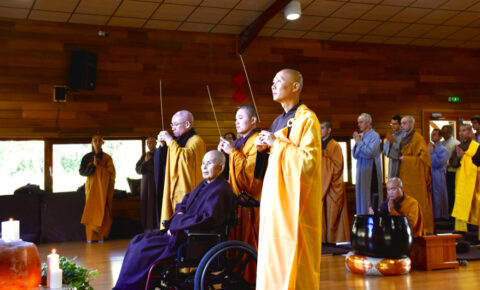 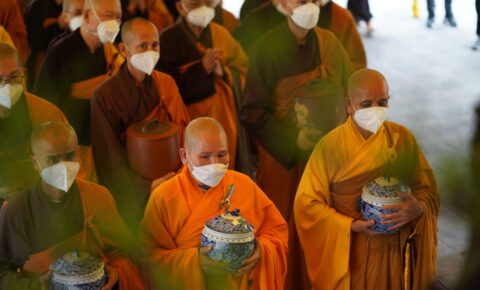 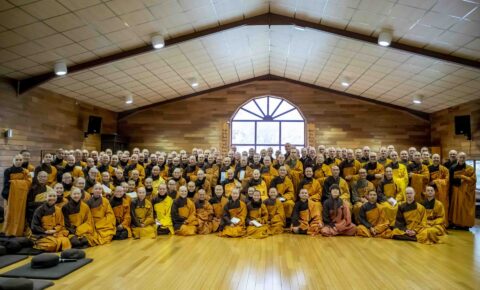 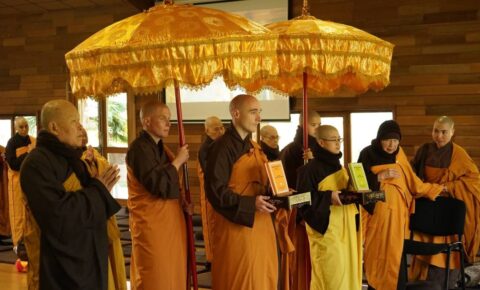