In this letter to children from 1987, Thich Nhat Hanh (Thay) recounts a story about really appreciating the beauty in natural objects like leaves and pebbles.

Thay would like to tell you a story about the leaves that Thay and some children picked in June, in the mountain woods next to the Kim Son monastery. We were in a retreat with 250 people, including 24 children. That day, Thay and the children led the walking meditation with the whole sangha. The path through the woods was very beautiful. Thay came across a leaf and picked it up. This leaf was the size of two thumbs of a 10-year-old child put together. It was very beautiful and multi-coloured: red, green, purple and yellow. Its veins could be seen clearly. Thay gave the leaf to little Vi.

We stopped at Piety Garden to rest. Everyone sat down under the trees and sang “Coming back to the island of self” in Vietnamese and English. When the singing ended, Thay said: “I would like to give you some good news. During walking meditation, Thay found the most beautiful leaf in the woods and gave it to Little Vi.” Then Thay turned to Little Vi and told her to show the leaf to the sangha. Everyone focused on the leaf. The leaf became so present. It was indeed so beautiful and wondrous. Thay continued: “In our daily life, we often come across many things that are so beautiful and wondrous. But because we don’t pay attention we are not able to see them. It is such a pity.”

Then the sangha stood up and continued to walk in silence. Upon returning to the yard of the monastery’s Patriach Hall, people gathered around to learn more about walking meditation. Thay told Little Vi to give the leaf to her Mum as it was the most precious thing she had that day. Her Mum was so happy to receive that invaluable gift. Mother and daughter happily hugged each other in the sangha’s presence.

The next day during walking meditation through the woods, the children collected 12 leaves and gave them to Thay. Thay was very happy to receive the leaves. He put them into the two pockets of his jacket. It was already June but that day was cold. Every day, the Madona Mountain was covered in fog and people still needed to wear warm clothing. When the walking meditation ended, Thay told the Sangha that he received 12 beautiful leaves from the children. Thay said: “Dear sangha, I am very happy to have been gifted the leaves by the children. But I don’t want to keep that happiness just to myself. I want to share it with you.”

Thay then suggested that each child received back one beautiful leaf and gave it to their Dad or Mum as a gift. Everyone followed their breathing while watching the children offer the gift to their parents. After that, they practised hugging meditation according to how Thay had taught that morning. They hugged each other in mindfulness in order to realize the happiness of being able to hug and of being hugged. The sangha watched that practice in silence and felt as touched as if they were taking part in a Rose ceremony. The gift was a simple leaf, yet it was so precious because of the great happiness it brought. There is no need to spend a lot of money to buy gifts for our beloved. If we are mindful, we can find countless invaluable gifts. The way we look at each other, our two arms, can all be invaluable gifts.

The following day during walking meditation, the children collected even more beautiful leaves. Some children also gathered other equally beautiful things such as a pebble that glittered like a diamond, a shell that was spiral like the citadel Co Loa of ancient Vietnam.

Dense mist hung in the air that day and the trees were drooping with water. All the leaves were covered with dew. Thay’s two pockets (which were not so large) were stuffed with leaves, pebbles, and shells. There were at least 60 leaves, all very wet. Thay already had in one of his pockets a small square clock (the kind that you can use for sitting meditation) and a piece of paper that contained a poem about walking meditation. The paper was folded fourfold. The clock was wet, but remained unscathed. The paper became soggy and the poem was smeared. Thay discovered this at the end of walking meditation but he did not mind. He could ask the poet to rewrite it because the poet was among the retreatants who stayed until the end of the retreat. Thay said to the sangha: “Dear sangha, today I am the happiest person on earth because the children gave me so many beautiful leaves, lovely pebbles, and precious shells. I need to share this happiness with you.”

Thay suggested for 24 children to come up to each receive a leaf, a pebble or a shell and then offer it to the other people there (who the children addressed as “aunty” or “uncle”). Thay said: “You can offer a gift to anyone just like how you did for your parent yesterday.” Because there were plenty of gifts, each child had the chance to give them to two or three people. Happiness was shared all round that morning.

Dear little ones, each day we need to find a way to bring happiness to one or two people by giving them a gift. The people could be our loved ones in the family or our friends. Such a gift does not have to be bought with money, it can be found when we keep our eyes open. A smile, a few words we say, a hug are all ready gifts that are never lacking and never go away. Giving people a gift, bringing them happiness in this way is the meaning of the word “maitri” in Buddhism. Maitri is loving kindness, and loving kindness means to bring joy to others. Thay knows up to 1,000 Vietnamese children in Europe, America, and Australia. If every day, each of these children brings happiness to one person, then each day they can make 1,000 people happy. Thinking in this way brings joy to Thay for the whole day.

Do you know what is the name of the future Buddha? His name is “Maitreya”, which means “The Giver of Happiness”. The word “Maitreya” is from the root word “Maitri”.

Is Maitreya Buddha an assembly of all of you?

You can find a range of Plum Village practices for children on this page. 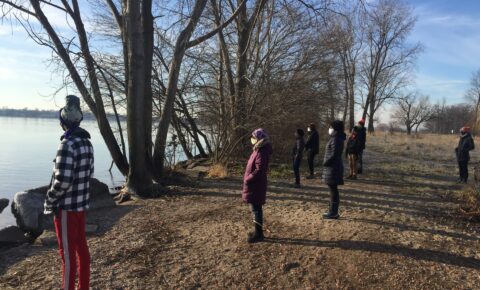 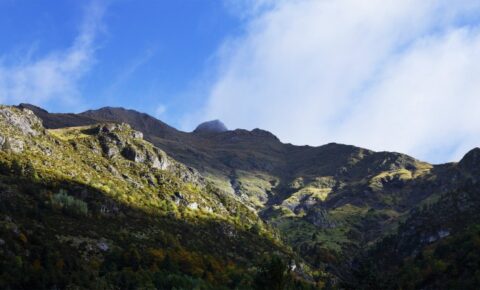 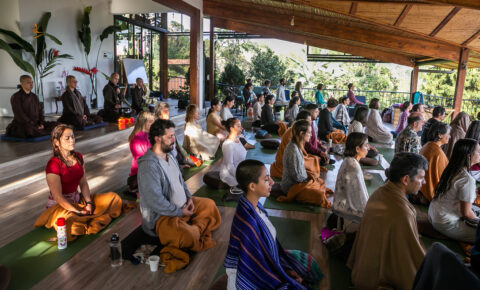